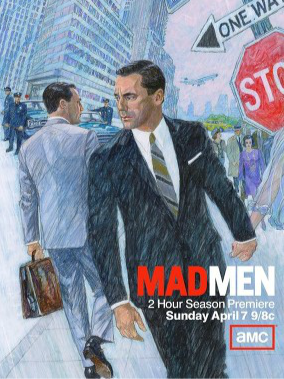 I  am a huge fan of Mad Men. You’ve probably seen me check in on Get Glue via Facebook or Twitter religiously every weekend. This past Sunday marked season six season’s final episode.
The episode really gave fans a peek behind the iron curtain of who Don Draper really is. He revealed truths to his coworkers, bombed the biggest new client meeting with chocolatier Hershey’s, and finally showed a side of himself to his children that they were yearning to know all about.

The episode also talked about new beginnings and fresh starts. If you’re a native New Yorker you might be able relate with Don’s character and his path to destruction. Heck, if you are any type of native city-person,  when you grow up in or around a big metropolis, or even if you transfer yourself to a big city, the experience can be overwhelming. With so many distractions that surround you, it is very difficult to stay on the straight and arrow.  This episode really resonated with me personally. I confess, many of the countless Mad Men episodes always resonate with me, that’s why I am devoted fan.

To see the depiction of the same experiences that happen today still occurred in times like the 1960s is uncanny and ironic. Even back then people, professionals, and all types of individuals were equally overwhelmed with so many distraction that surrounded them. As you see here in Mad Men, these distractions can ultimately cause a pitfall in your life. At one point in my life I felt that seem unraveling feeling, chaos, Post 9/11 confusion and distraction all in which led to my move to the sunshine state.

Don’s character really unraveled this past season and he showed his path to destruction throughout each episode and how it affected everyone around him.  So how do you as a business professional avoid a path of destruction? I rounded up my top five tactic that help avoid a potential path of despair!

2) Discipline
Razor sharp focus, a solid mapped out strategy for success and absolute discipline is another tactic to avoid professional and personal destruction

3) In Moderation
Everything is good in moderation so apply that practice generously because if you go overboard the consequences are futile.

4) Relocate
The number one piece of advice is to relocate and start fresh. It gives you a chance to get out of a poisonous atmosphere or change it up.

5) Re-invent yourself
The last resort or sometimes the first resort. Reinventing yourself is a great way to place yourself somewhere else and start a new once again

Now as for Don we’re gonna have to wait for season seven for his new start.  He won’t be relocating to sunny California as he sacrificed that ticket to his self-destruction partner Ted,  giving him the pass to move to avoid his adulterous demise. See you next season Don, I am anxious to see your next move!