The 21st Annual Ocoee Founders’ Day Festival was held on Nov. 7th and 8th and whoa boy was it a massive success with about 5,000 attendees over the two day festival. The event was packed full of fun events, rides, local food vendors, homemade goods at the marketplace, and awesome concerts with some of the biggest names in country music. Every year the festival grows and this was definitely the biggest one yet! Check out a preview of the first night by our talented videographer Brandon Kari:
Post by Ocoee Founders’ Day Festival.

We were honored to handle the social media, website, full event branding, signage, advertising, sponsorship initiatives, the event app, on-site social media coverage and the social media wall at the festival. Our goal was to increase the visibility of the festival and perform more outreach through social media, particularly on their Facebook page. We grew the Facebook and other networks tremendously by putting together a highly engaging and interactive content calendar as well as incorporating different tactics to activate social sharing. One of the tactics we used to encourage users online pre-event and during event was to share event badges like this one: 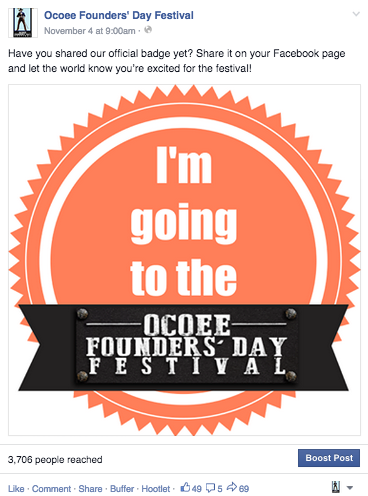 We also created custom social badges similar to this for sponsors and vendors. This badge saw over 69 shares and reached over 3,000 people organically on Facebook. The badge was able to convey enthusiasm and excitement about the event by simply sharing with their friends.  We also pushed attendees at the event and online to share their photos via the hashtag with smart and witty graphics and signage: 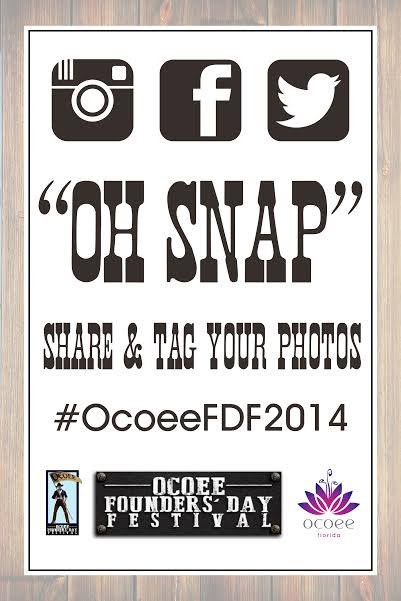 in addition to Facebook efforts, we also helped grow their Instagram and Twitter pages and revamped their branding and presence online. Quickly we designed a new website, logo, event app, event hashtag, advertisements and a full fledge interactive social media campaign. Through social media, we were also able to attract a younger demographic while engaging with the older crowd. We encouraged people to take photos during the festival and post them to social media using the hashtag #OCOEEFDF2014. We utilized the hashtag to heavily track the conversations as well as showcase them on our at the event Social Media Wall 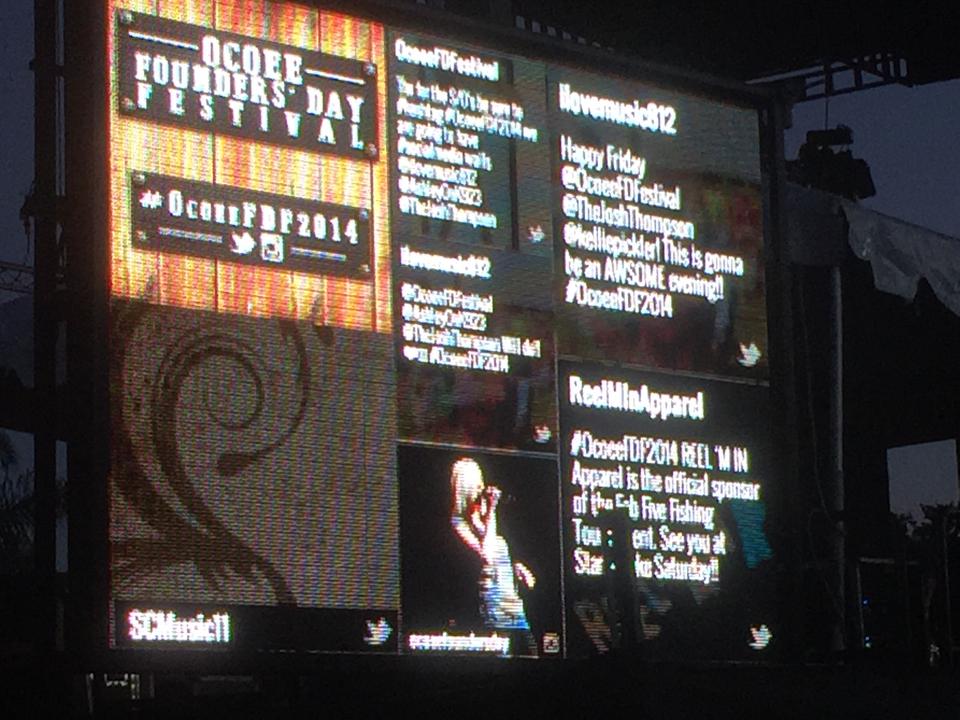 Along with the event’s live social media – we tracked the entire social media activity through our Storify page we created for the event. The event hashtag tracked over 600 posts and tweets over the 2-day period. Great stats for a festival that never had a social media presence prior. Check out all the social media aggregation here or scroll through the slideshow below!

In the few months we managed their Facebook page, the “likes” skyrocketed and increased by the thousands! The most successful part of the event was by far the country music stars. Chris Young our headlining act won the hearts and ears of festival goers. Especially one of our Meet and Greet winners – Melissa: 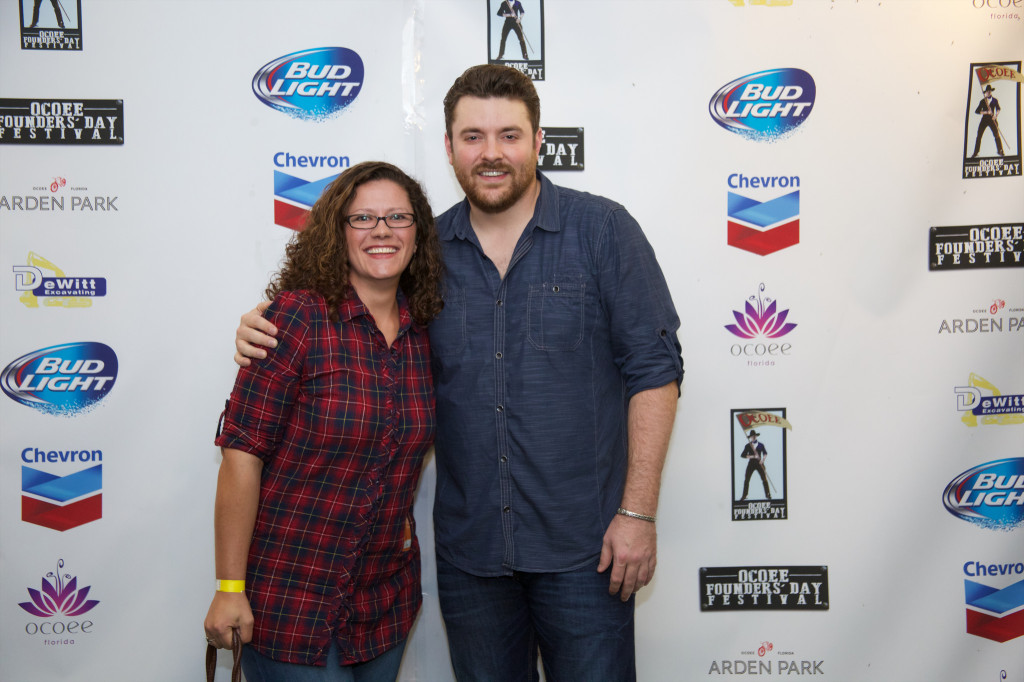 I even had the chance to meet Chris Young and present with our clients’ Party Flavors Custom Cakes a customized buttercream Guitar cake to Chris Young designed by Tiffany Compton. 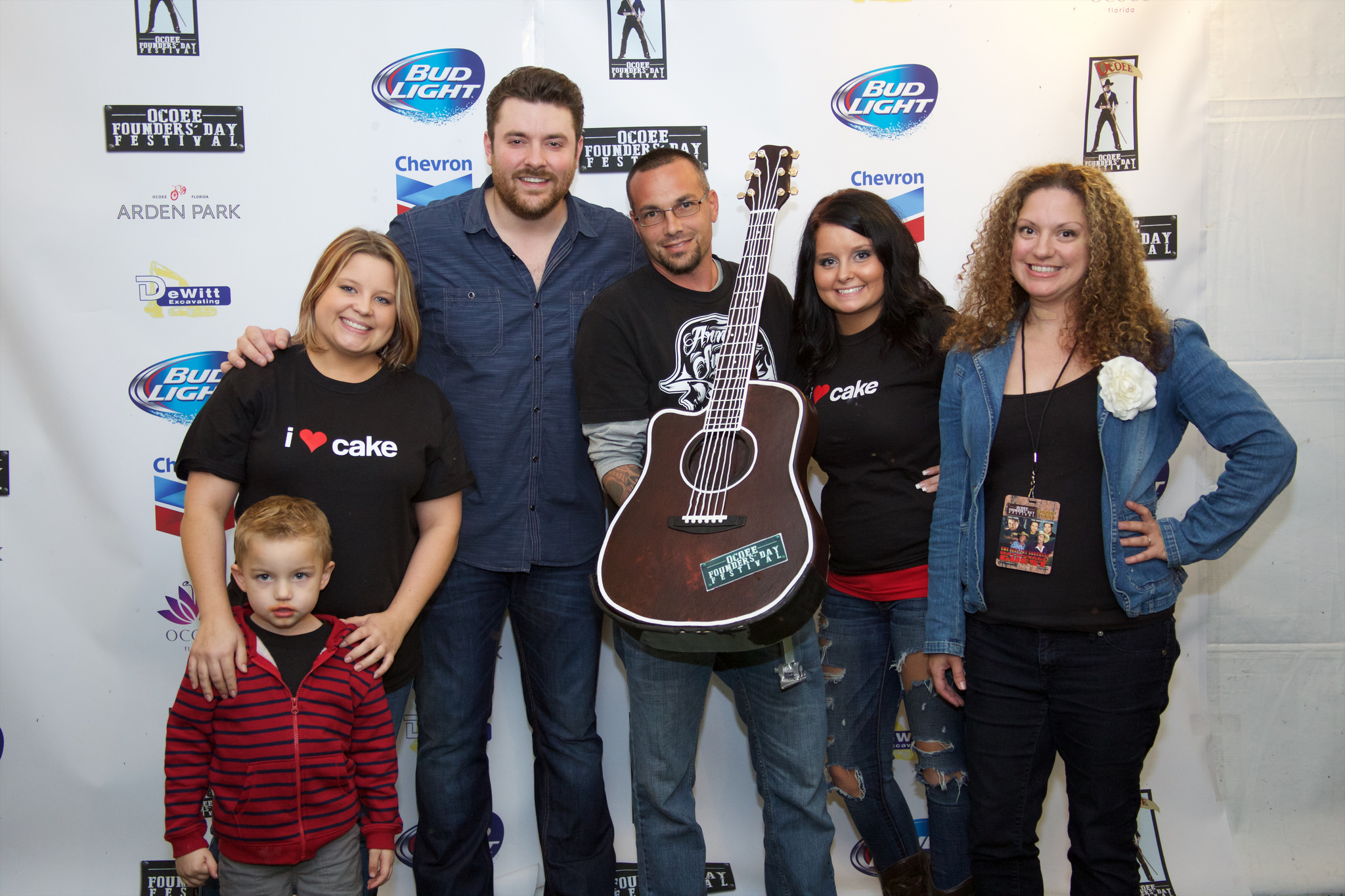 As he closed out the last night of the festival on Saturday night – he really rocked the crowd with an amazing stage set and an awesome musical presence. We’re not even country fans and our team became Chris Young fans after this amazing performance! 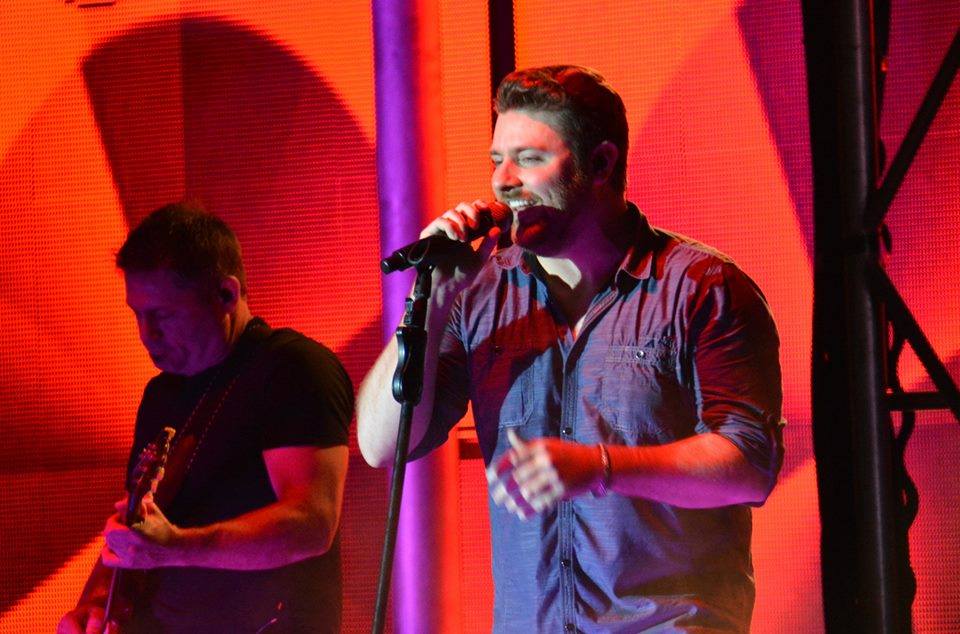 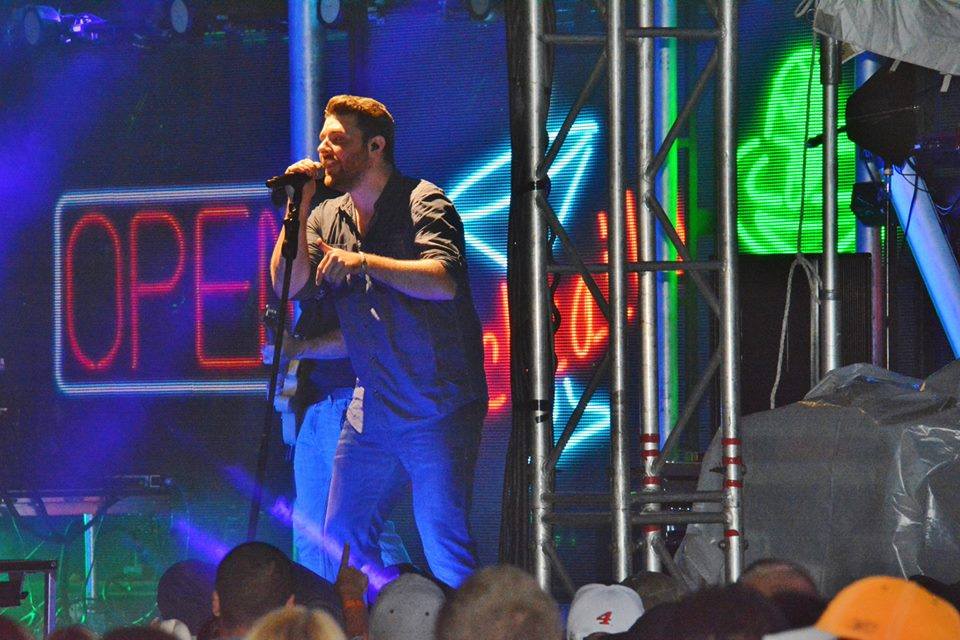 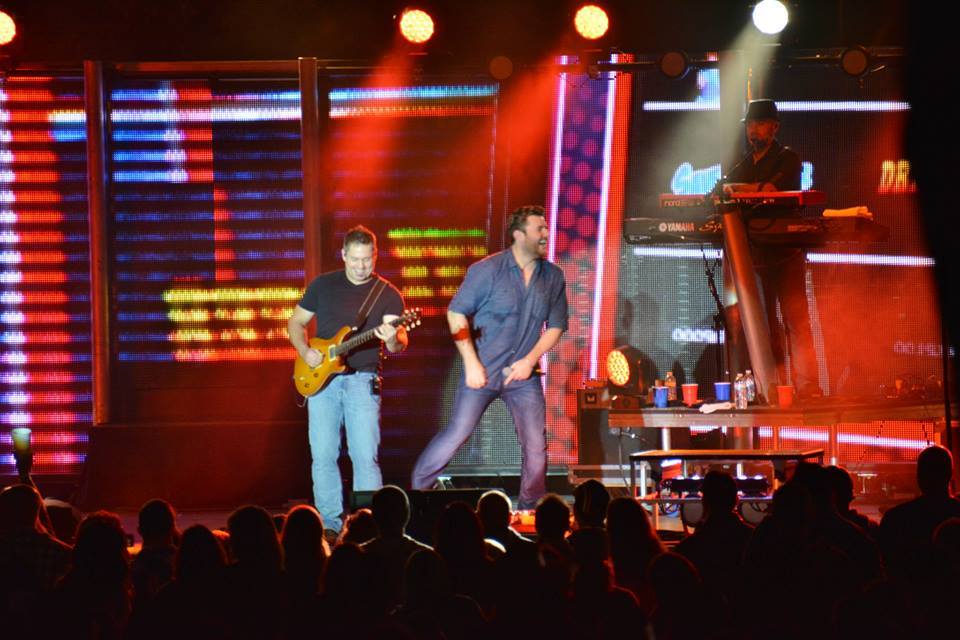 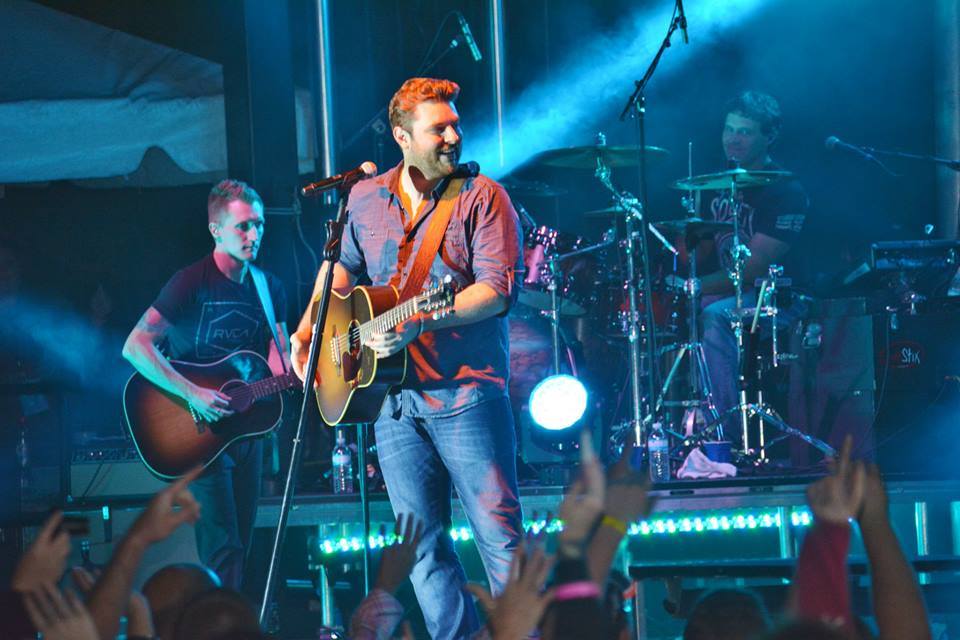 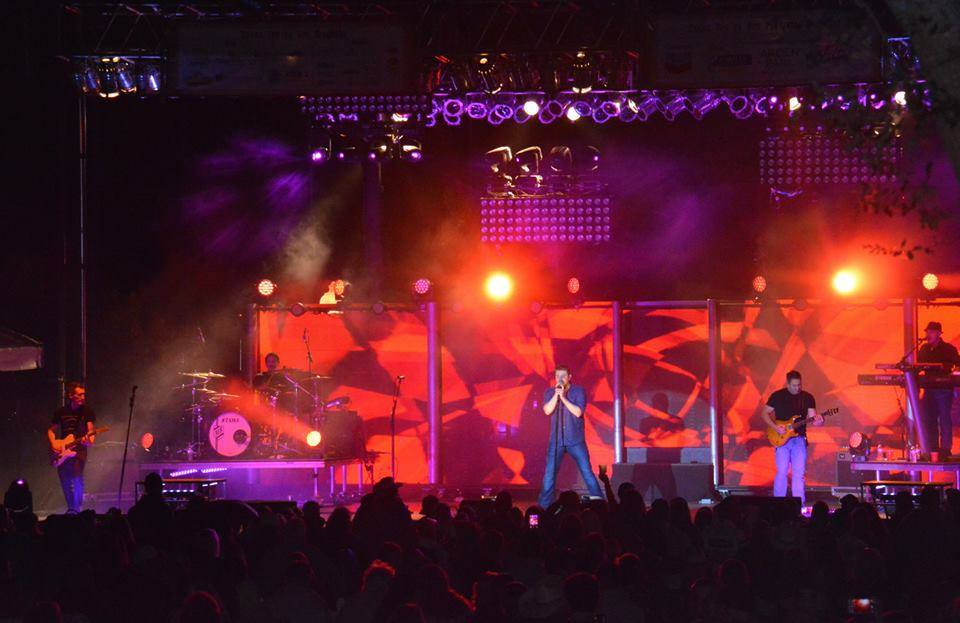 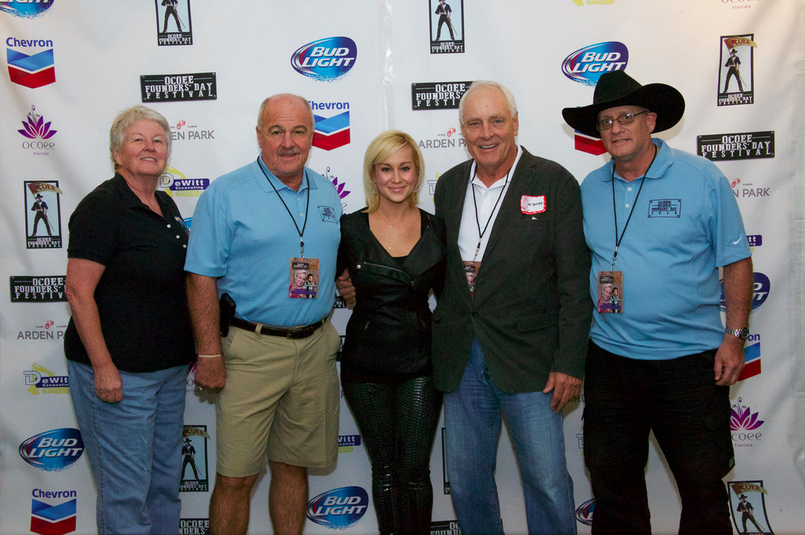 Josh Thompson was the opening act for Friday night and he was great! 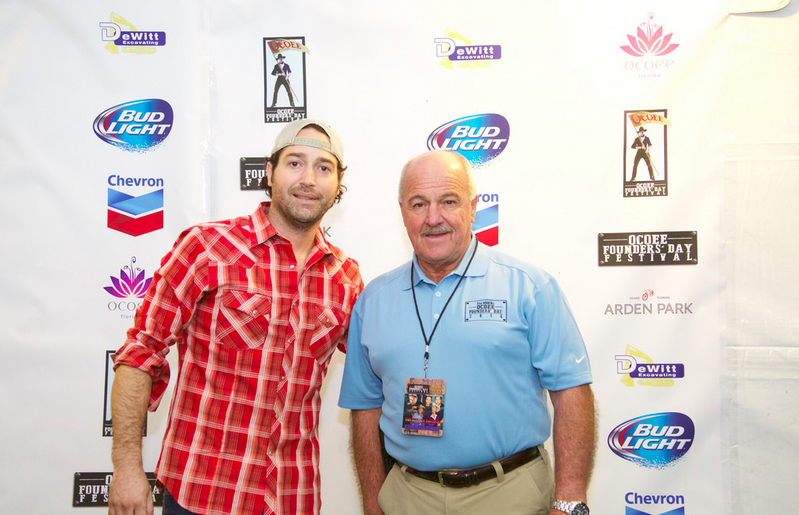 Another crowd favorite was the Bellamy Brothers! 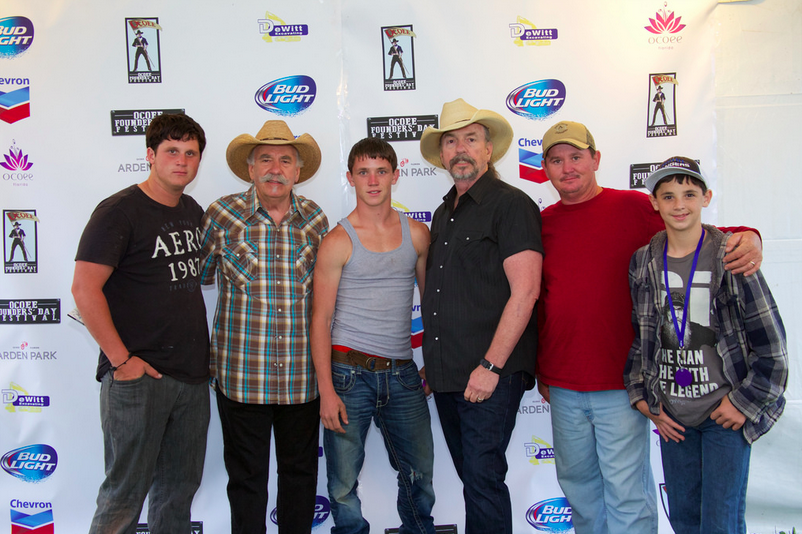 Another one of our great accomplishments was the creation and promotion of the official event app. With the app, users could receive exclusive updates, look at a festival schedule, read information about the music performers, rate their festival experience, and more! It proved to be a great tool at the event and helped guide attendees to the schedule and featured vendors. It also gained 600 downloads! A great statistic being the first year in existence for the festival! 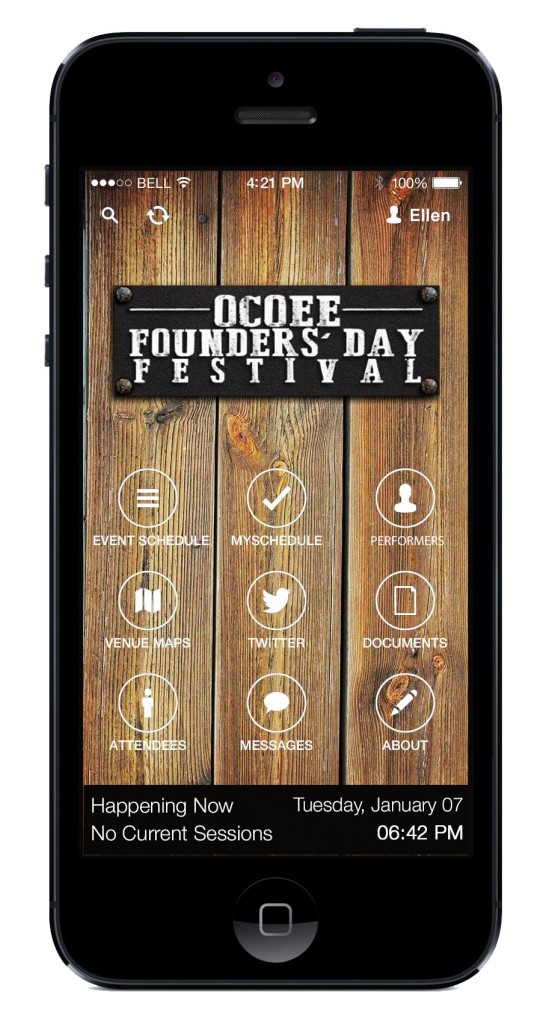 While we worked tirelessly during the months leading up to that fateful weekend in November, the two days of the actual festival were truly intense! We continued updating their social media throughout the event, with updates and photos appearing on the big social media wall. We also handled the on-site event displays, ran the scavenger hunt, managed the information booth, and handled the Bud Light meet and greet contest (phew!). 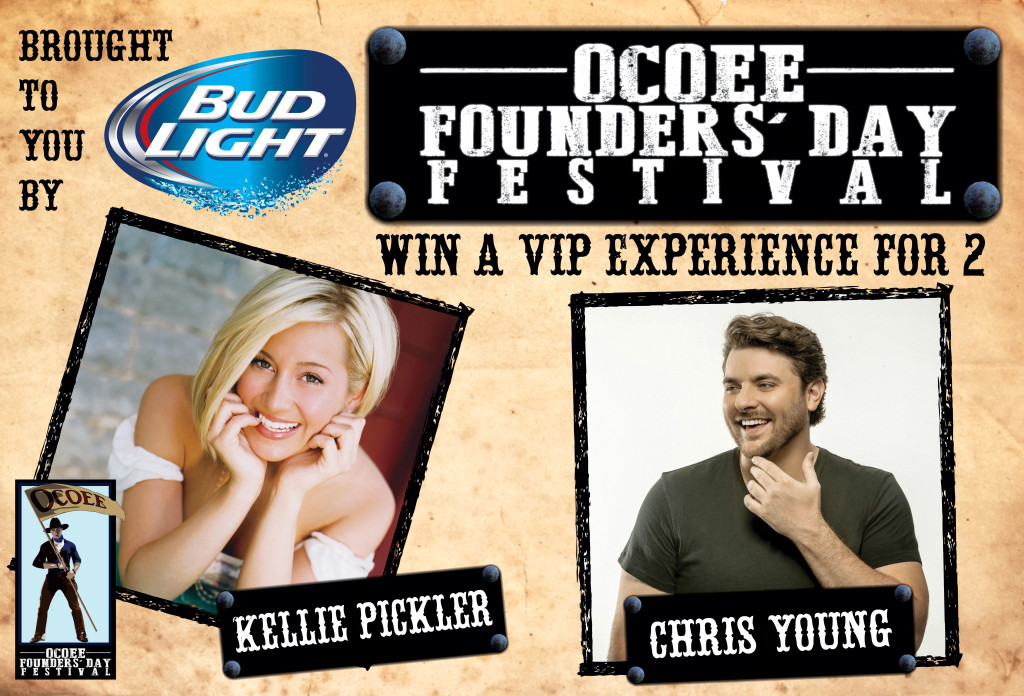 We used the Ocoee Lakeshore Center as our hub of operations. Utilizing the center’s A/V capabilities, we live streamed the big concerts on to televisions throughout the building. 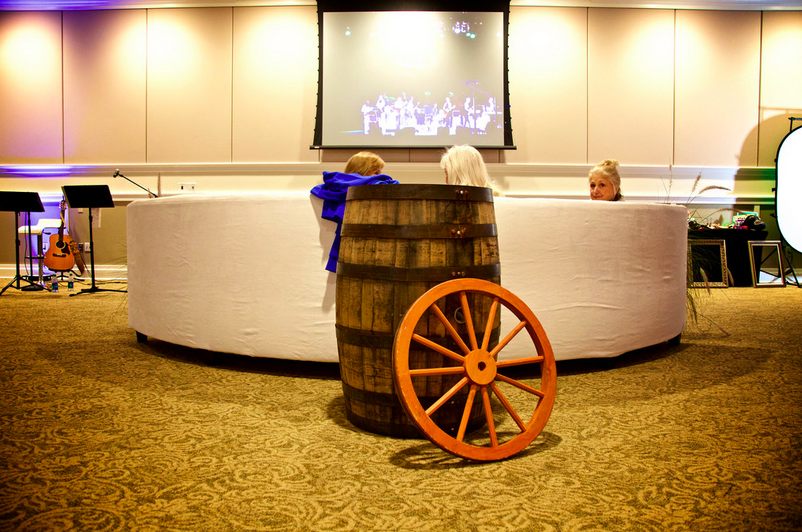 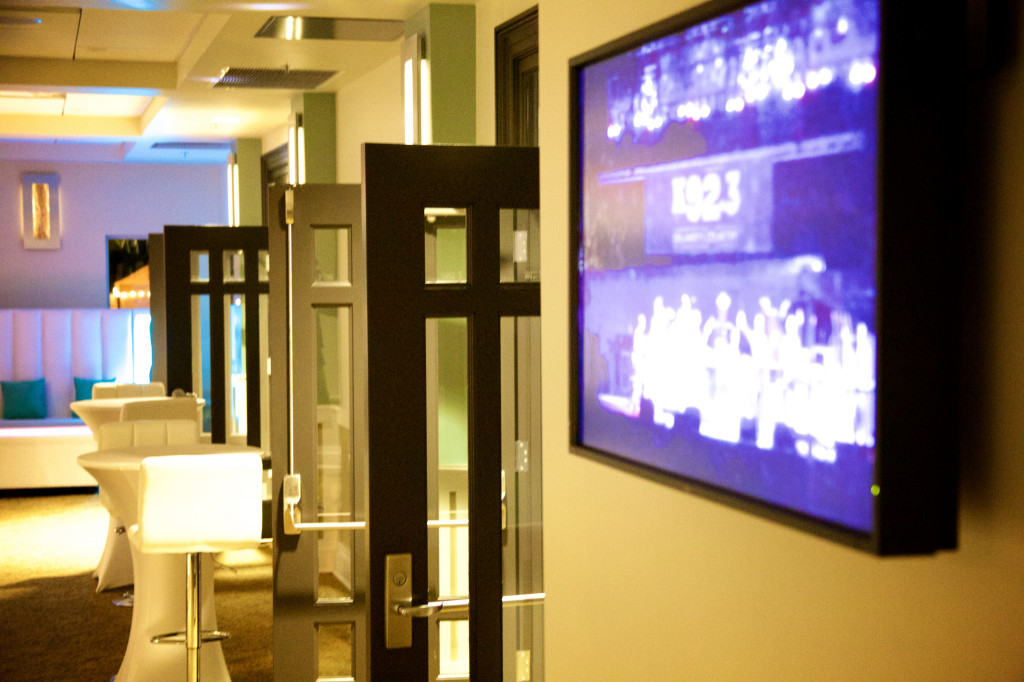 The two days went by like a whirlwind but we loved every minute of it. From the early morning fishing tournament to the big fireworks show following country star Chris Young on closing night, there was a lot of ground to cover on social media. It was all really lot of fun. The success of our efforts goes to show that a smart approach to social media marketing can seriously boost awareness and engagement! We can’t wait until next year! 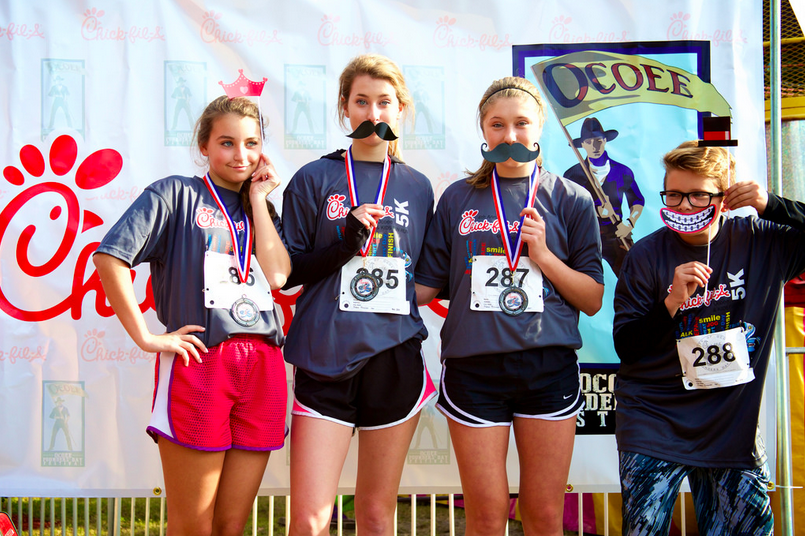 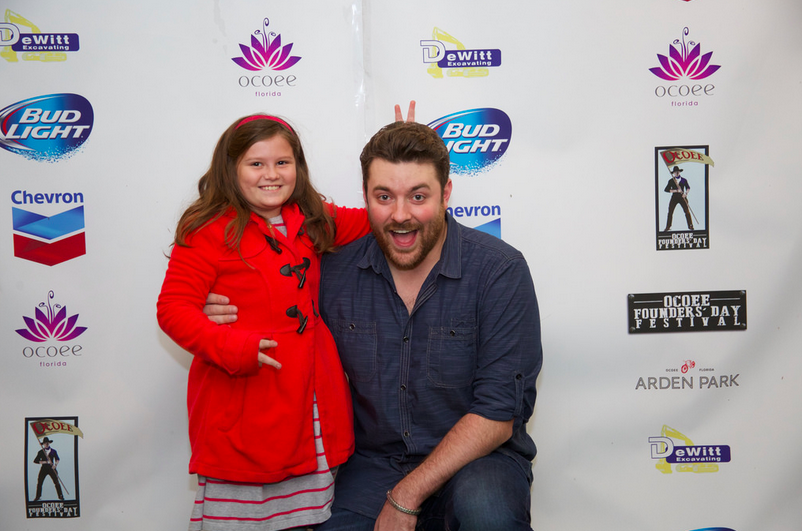 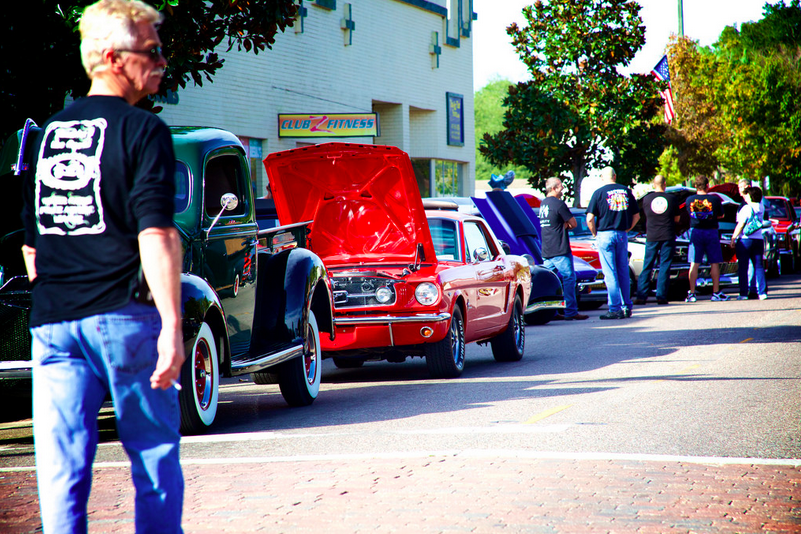 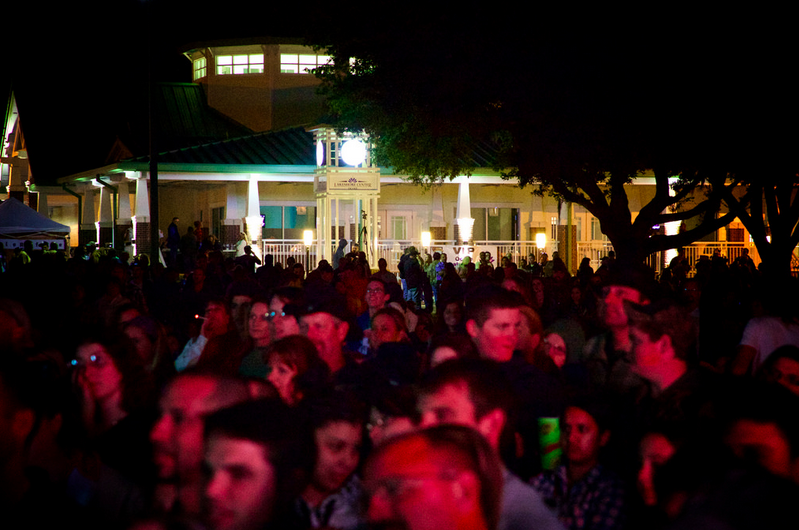 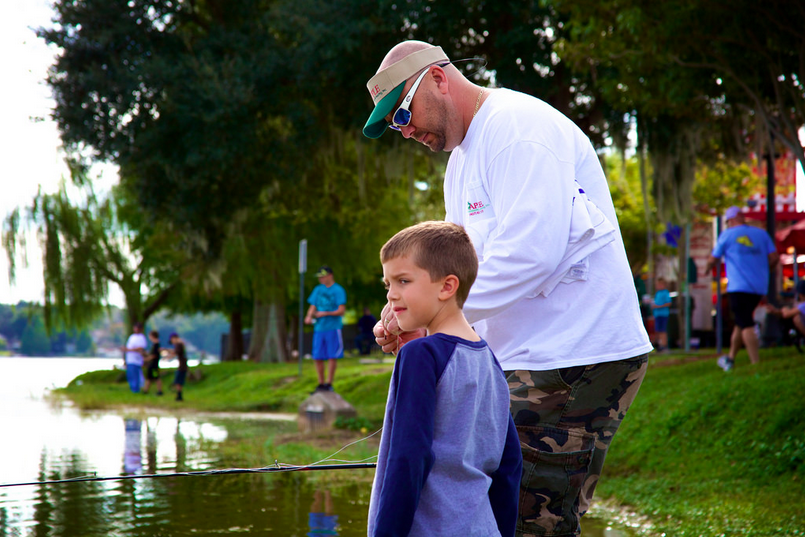 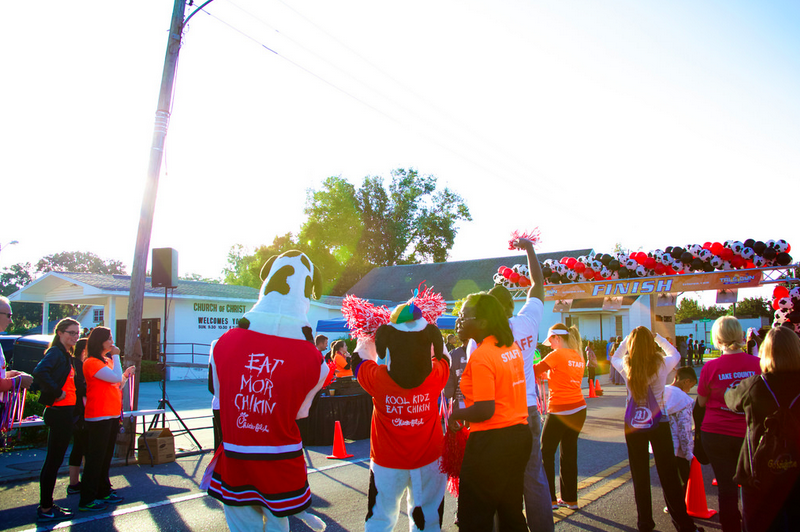 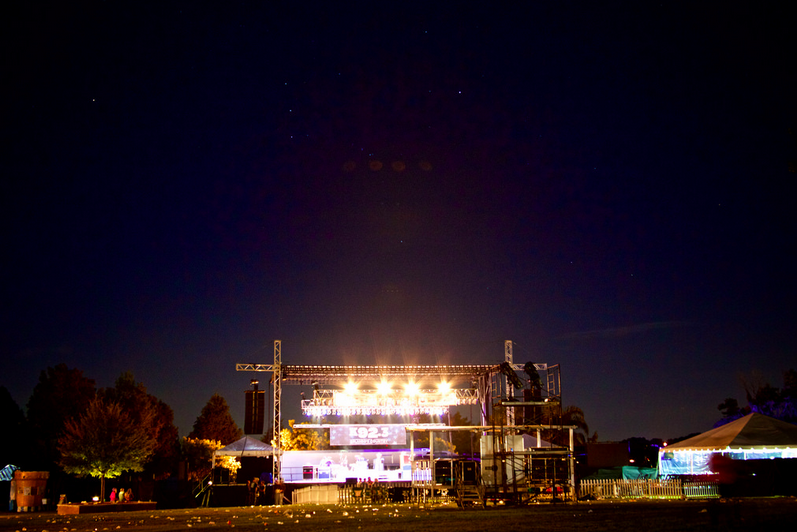 A big thank you to our team, partners and sponsors for making this festival an amazing experience and success! Here is a sneak peek of the 2nd day and start of the Chic-Fil-A 5K run: