Big Tech Companies Think Chatbots are the Future. Here’s Why:

Thanks to advancements in natural voice recognition technology, big tech companies–Google, Microsoft, Amazon, IBM, among others–have made conversational interface technology (chatbots) household names. By mobilizing the power of AI and continuing development in this area to make further improvements, Alexa, Google Assistant, and China’s XiaoIce have become commonplace technologies in homes and workplaces across the world.

Each of the big players has a slightly different approach to AI usage, and below is a short overview of some of the best known chatbots on the market today. Here are examples of how the ‘big four’ are investing heavily in chatbot technology.

The Evolution of Alexa

Back in 2014, Amazon released Alexa alongside its Echo product. The smart wi-fi speaker uses voice recognition technology to respond to a user’s commands and also connect home appliances like heating and lighting for easy control. The success of Alexa has spawned further developments, and Alexa for Business is poised to change workplaces forever.

Amazon has made its voice recognition technology available to all in a bid to become the dominant company in the area of voice computing technology. However, voice recognition is just one element of Amazon’s chatbot revolution: text recognition and conversational interaction are further enabling tech companies to merge voice and text based chat interfaces with their apps.

IBM took a different approach when they launched Watson, a cloud-based AI platform which enables developers and clients to build, test, and deploy their own chatbots for mobile and messaging platforms. The technology imitates conversations between users and the apps, making it possible for developers to create custom-built chatbots for their own brands.

Additional capabilities through APIs such as Alchemy (for sentiment analysis), Tone Analyzer (for emotional analysis), and Conversation (the chatbot builder) have encouraged multiple big brands from Macy’s to H&R Block to embed this technology into their own services.

In response to Amazon, Google has released Google Assistant. Integrating with other devices like phones and watches, Google Assistant allows users to chat directly with the technology to manage their commitments and get answers to all manner of queries, from account balances to the closest Spanish restaurant.

The Snowball Effect of Chatbot Technology

Already, over 5 billion users are active on the top 11 messenger apps worldwide each month, and companies across the globe are successfully inserting their chatbots into these platforms in order to engage with consumers and meet basic requests. With each chatbot interaction, the neural AI networks that power the programs get even smarter.

It’s fair to say that chatbots could be the future of communication, at least in B2C and B2B interactions. While chatbots and the technology that drives them is still growing, further investment, development, and adoption by consumers and businesses will see a proliferation of the technology in coming years, in addition to the continued permeation of chatbots in everyday interactions.

Survive in the world of digital marketing with chat bots

The rise of technology and the Internet caused a huge shift in how advertising works. Long gone are the one-way streets of brands speaking to consumers and never hearing anything back. Today’s world moves at lightning speeds and the ability to communicate with anyone at the drop of a button has caused huge shifts in how companies choose to spend their money on marketing. Chat bots are definitely here to stay and need to be embraced, however it’s not the only tool you’ll need to survive in the world of digital marketing.

Check out these crucial tips: 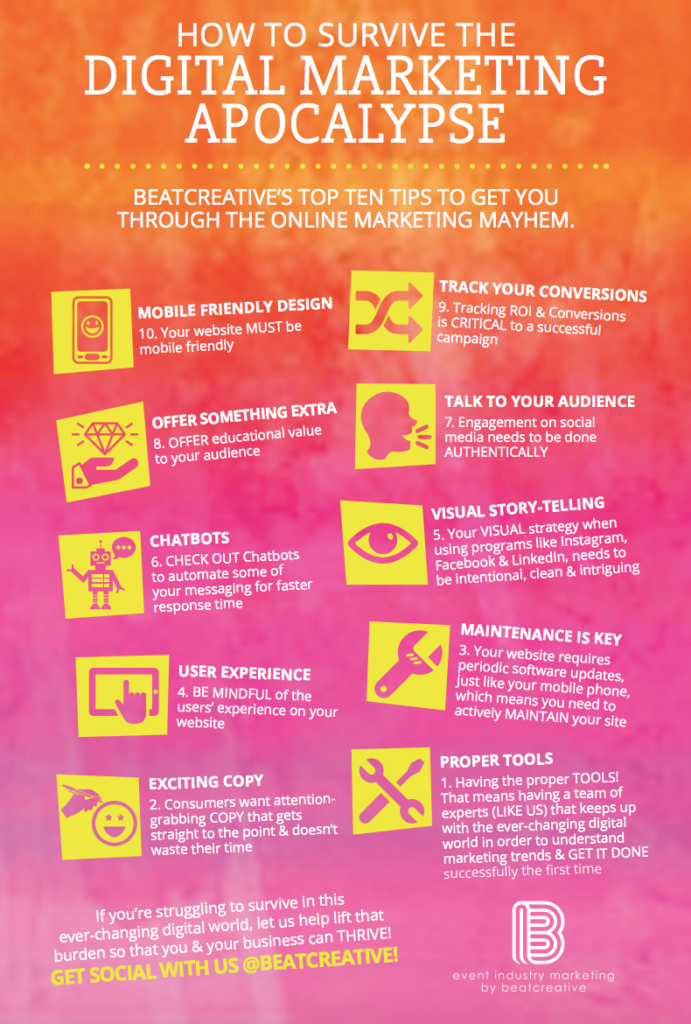 Contact us if you need any help surviving in the digital era!

The warmest wishes to a super talented and AWESOME member of our team!! Wishing you a day full of laughter and happiness!! #happybirthday #birthdaywishes https://t.co/rPxwGGoGiO
h J R
@BeatCreative

We want to wish our newest content specialist a #HappyBirthday!!! You are ROCKING it & amazing addition to our team!!! Theresa isn't the only surprise we have in store, stand by for NEW updates and exciting things to come in #2022!! https://t.co/oqWDkTEy9x
h J R